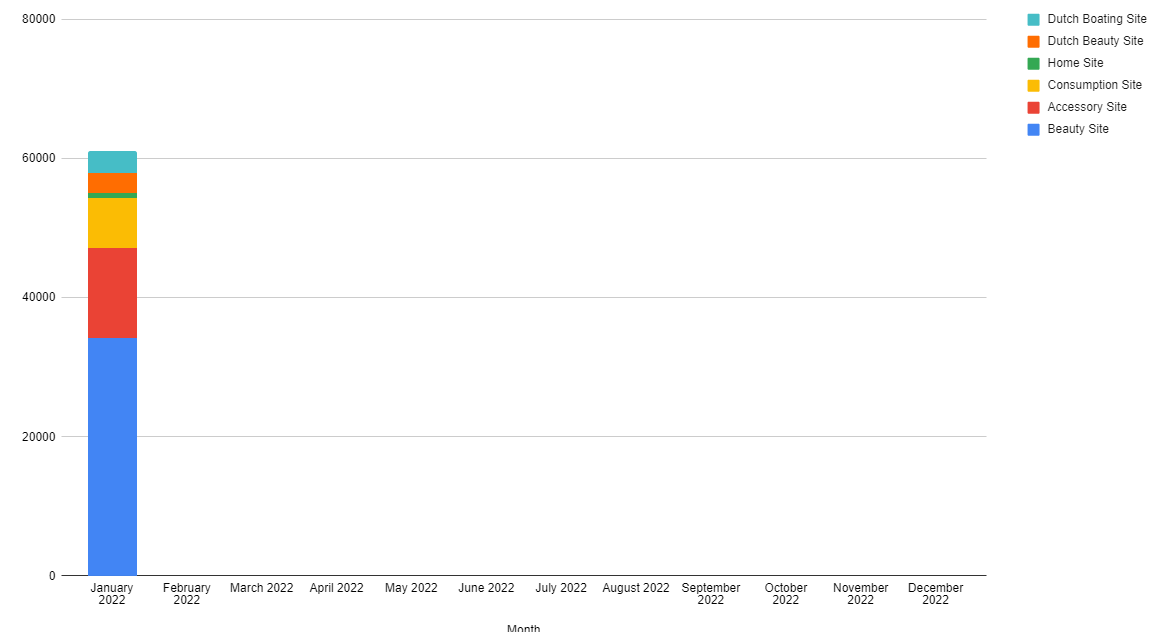 Hi everyone! This will be the very first written income report where I track all the traffic and earnings of my entire portfolio! Since this is the first one, I’ll be giving a little background on me and my portfolio, as I’ve been doing this for about 3 years already.

I’m Jasper Pieterse, and I started my very first site in December of 2018. I quickly build this site to great success, earning about $3,500 a month after only 12 months. After 23 months, the site was doing about $8000 a month in income with about 250.000 monthly pageviews.

Sadly, this site got hit by a Google Core Update in December 2020, and my site took a nosedive in traffic of about 80%.

The first few months (and let’s be honest, the first year) after the Core Update, I was really not motivated/inspired to do any work. I often refer back to it as ‘the wasted year’. Of course, that refers to my work life, not my general life!

But yep, I didn’t do much for the entirety of 2021. But I decided to turn things around again in 2022, and I started to put in the work again.

You can also watch my January 2022 Portfolio Report on my YouTube channel!

Although I have been blogging for over 3 years, I will be using January 2022 as the baseline for this income report series.

That does mean that this month’s total overview graph will look pretty empty, but it makes things much easier for me.

It also marks the point where I decided to give web publishing my all again.

So here’s a quick overview of my total pageview levels for January 2022:

And here’s an overview of my January 2022 income:

Let’s also take a look at each individual site.

This is the very first site I started, dating back all the way to December 2018. I started this site by following the Project 24 course, and quickly grew the site to great success.

But as mentioned before, this site got hit extremely hard by a Google Core Update, losing about 80% of its traffic. That was a huge blow to the business, but also to me personally.

I got to a point where I had 0 motivation to even open my laptop, so it was time to make some changes.

In July 2021, I made the decision to stop working on this site altogether. That wasn’t an easy decision to make, as this site was like my firstborn child. But it had to be done, and to this day, I haven’t worked on the site at all.

With that said, though, even if the site lost 80% of its traffic and income, it still pulls in some decent numbers.

Currently, there are 405 articles on the site, and they still bring in nice pageview and income numbers:

This site is monetized with Ad Thrive ads and Amazon Associates. And despite the bulk of the articles being affiliate-heavy, about 75% of the income comes from ads.

As you may expect, there are no future plans for this site. It’s dying a slow death, but that’s fine with me. It’s still the only actual earner in my portfolio, so selling it for a low multiple and being left with no income also doesn’t sound like the right choice.

The Accessory Site is the site I started as a response to the December 2020 Core Update. I saw an incredible dip in traffic on my only site, and that made me realize one thing:

I need to diversify.

So I started this site. And I started off great. I was publishing a good amount of articles, but after a few weeks, I started to get into that semi-depressed ‘I already get tired and angry by just opening my laptop’ phase.

This really halted the growth of this site, and that shows in the sandbox period. Usually, I’d like to see a site pull in traffic numbers after around 8 months. This site took about 12-13 months.

With that said, though, the site is growing really nicely now. In December, we saw 8344 pageviews, and that jumped to nearly 13.000 in January.

The site is not yet monetized, but with these traffic levels, I’ll be working on getting the site monetized this month. That will be done with Ezoic ads.

The plan for this site is to keep growing it as much as I possibly can. This is looking to be a promising site and I’d like this one to be the largest site in my portfolio somewhere in the coming months.

The Consumptions Site is one that I started in September of 2020 to finally supplement my then-only site. At the time, the Beauty Site was my only one, and I already knew that I wanted a portfolio and not just one site, so I started this one.

Thing is, I really have not done much for this site. It’s still only sitting at 40 articles, and I think that mainly has to do with the fact that I overstepped my boundaries.

This is a site with the potential to grow to thousands, if not tens of thousands of articles, and at the time, I was doing it all by myself.

Additionally, I also didn’t particularly enjoy writing for this niche, so I kind of left it in the corner. For 1,5 years.

In December, this site had a total of 10.000 pageviews, and in January, that dropped down to 7230. Granted, this niche has its high season in November and December, so I’m fine with the decrease in traffic.

However, the future plan for this site is to sell it off. I don’t see myself working on it anytime soon, and right now it’s just burning a hole in my hosting plan. So with that in mind, I started preparing this site for an exit.

And by doing so, I mainly mean that I connected the site to Ezoic. That was done at around January 10th, and the earnings were quite nice for the first few days.

I saw an RPM of about $20, which was much, much higher than my expectations. The RPMs corrected nearing the end of January, and now I’m seeing more like a $7 RPM.

Future plan for this site is to let it accrue some income and see what the average monthly earnings will be. This will give me a good idea of the site’s worth, and from there, I’ll be looking for a buyer.

This is a brand new site that I decided to start as a case study on my channel. The idea behind this site was to front-load it with a ton of content and see if that would get me out of the sandbox faster.

Most of the articles were published at the end of November, but this site sadly got hit by the indexing issues. So I’ll keep this one short, as there really isn’t much to say or show:

Currently, there are 79 articles on the site.

The very first Dutch site I started! I really just wanted to test the waters with this site. See how Dutch sites would perform. The site was started in June of 2020, and it was the second site I ever started.

Suffice to say; I did not try my best here. To this day, there are only 22 articles published on the site, and combine that with the low search volume (only 20 million people speak Dutch), this site is seeing low traffic levels.

I’ll keep the individual reports for the Dutch sites short, as these sites are really just there. I don’t work on them, but they run profitable and fund a few more articles every month.

This site does pull in decent RPMs, hovering between $5 and $10. But in all honesty, this site probably won’t see any updates in the foreseeable future.

My second Dutch site started in January 2020. This is another one of those sites that sits in my portfolio but is not included in the future plans. It’s there, it earns some extra money, but there are no active plans to expand it.

Compared to the Dutch Beauty Site, this one is slightly larger, sitting at 43 articles, but that’s still pretty low.

This site is also highly seasonal. Boating is a summer activity, and we’re in the middle of winter. Traffic levels are currently low, but that is expected.

It still brings in some residual income, so no complaining here.

Like the other Dutch site, there are no plans to expand this site in the near future. I’ll leave it be, as it does earn some really decent income during the summer, but it will not be included in my content plan.

What Are The Future Plans?

Before ending the first income report, I did want to talk a bit about my future plans. It has been a bumpy ride so far, and I’ve been hesitant about going all in, especially seeing that 80% drops can be around the corner.

I really do want to, but something inside me holds me back at times.

But I did create a future plan. And while there’s one overarching theme, building a large portfolio of sites, the plan will change from month to month.

I’d like to add a total of 30 articles next month, divided between these two sites.

Since the Home Site is running into indexing issues, the majority of the articles will probably go to the Accessory Site.

Hi everyone! I'm Jasper Pieterse and I have been blogging since 2018! On this website, I'd like to hare my story and experiences! 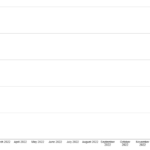 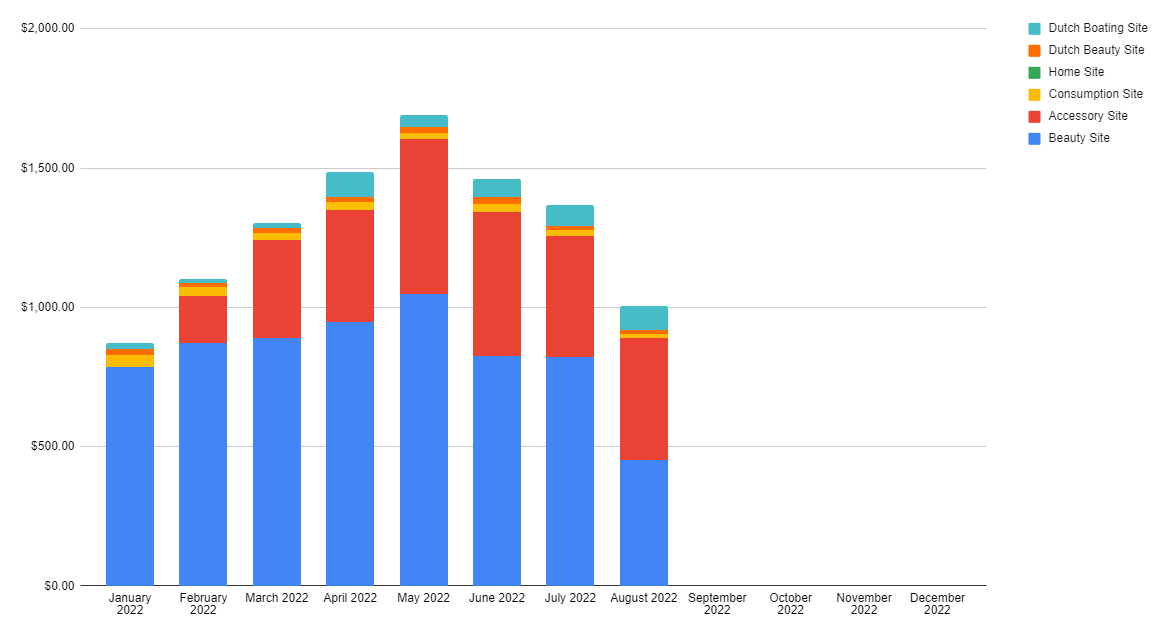 It’s time for the August Portfolio update! August has honestly been a pretty solid month for me! While the overall numbers are down by quite a bit, this was expected. Last month, we saw another 80% drop on the Beauty Site, which is my largest website. This 80% drop of course caused the overall numbers… 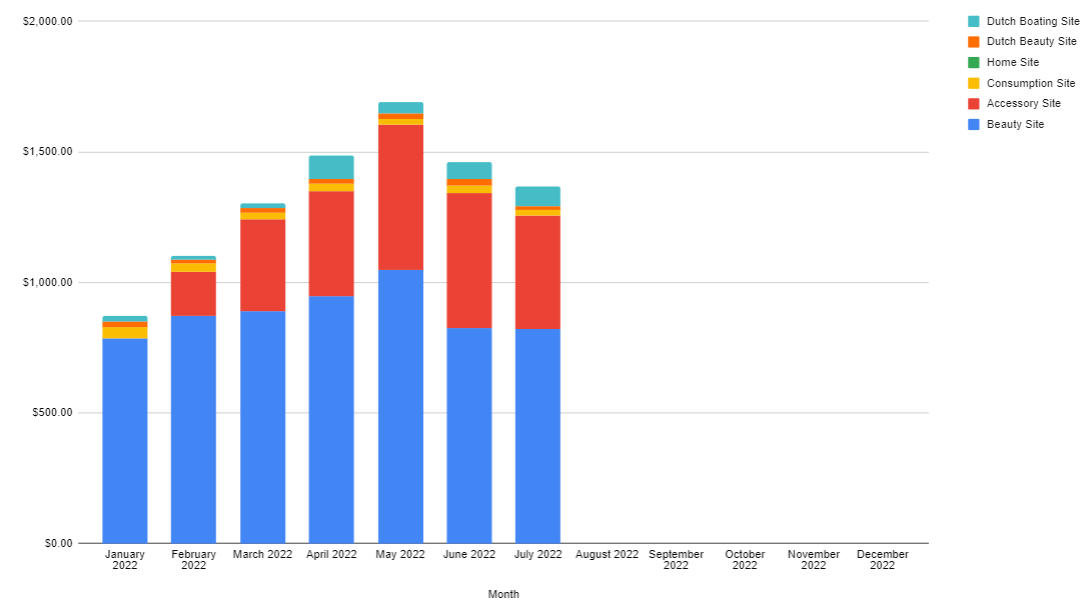 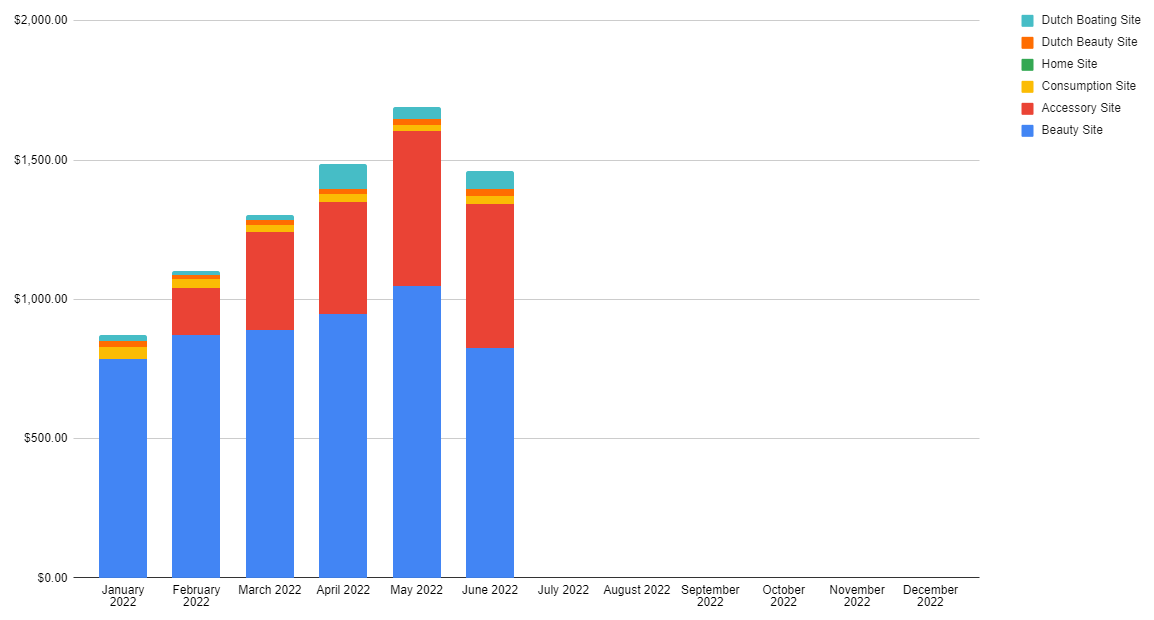